By the Nueces County Record Star

For Rosa Garza, staying positive is the key to getting through the fight against her worst enemy.

She was recently diagnosed with breast cancer in April, which was a shock to her since no one in her family has had breast cancer.

However, her mother passed away two years ago after battling a different type of cancer.

“When my mom had cancer, I saw her go through it. Until you have it, you really don’t know what they went through,” Rosa said.

“She was a strong woman. She would work, walk in the Relay for Life and wouldn’t slow down,” she said. “She’s the one that keeps me going. I do it for her.”

Rosa is currently staying busy at work as a pharmacy technician at CHRISTUS Spohn Hospital Alice, in her hometown. 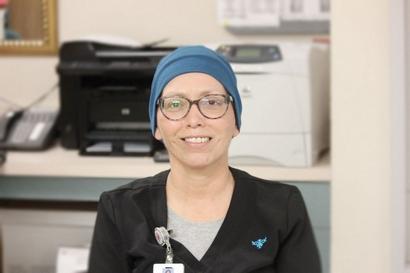 “I rather keep busy because it takes my mind off of things,” she said. “I want to keep positive because then the negativity will sink in. Working keeps me motivated.”

Her doctor has not yet determined whether she has stage two or three breast cancer until her chemo treatments are over. Altogether, Rosa has undergone 15 rounds of different chemo and will go through her last round by the end of October.

Rosa’s main support starts with her husband Isidro and three children Roxanne, Oness and Isidro Garza III and daughter-in-law. Her daughter often takes Rosa to her appointments and her husband takes her to chemo.

She said her two grandchildren are also what keep her going and occupied.

Other family members including her father, stepfather, four sisters and three brothers call her on a daily basis to check up on her.

“They keep me going and reassure me that I can call them if I ever need anything,” she said.

The main part of her life, her job, hasn’t changed much. Her co-workers and boss at the hospital are understanding of Rosa’s battle and treatments and don’t hesitate to work with her schedule.

“It’s terrific here, they’ve made it easy to keep coming to work,” she said. “I love working here. I’m lucky.”

Another important defensive force of her battle includes her doctor, Ajay Sehgal in Corpus Christi, who Rosa recommends to anyone diagnosed with cancer.

“He listens to patients and explains everything that is going to happen,” she said. “I feel comfortable there, he’s great and the staff is terrific.”

As Rosa fights her battle, she urges others doing the same to stay positive.

“Don’t stop doing what your daily activities might be,” she advises. “Keep going and don’t let it get you down.”