Honoring a CHRISTUS Spohn legacy on the links

Everyone at the Corpus Christi Country Club knows the Rogers family.

In particular, the names of Rick and Ham Rogers adorn walls of honor as golf tournament champions, while other plaques and portraits highlight their valuable service to the Club.

However, the Rogers name also is well-known in the community for numerous other invaluable reasons, largely because of the service of the late Dr. F.F. Rogers, a longtime surgeon at CHRISTUS Spohn Hospital-Shoreline.

“We’ll still get asked all the time, ‘Was your dad a doctor?’ They’ll say, ‘He saved my grandfather’ or ‘He saved my wife.’ It just makes you feel really good,” says Rick. “Our dad was just a kind-hearted man who made a big difference in South Texas.” 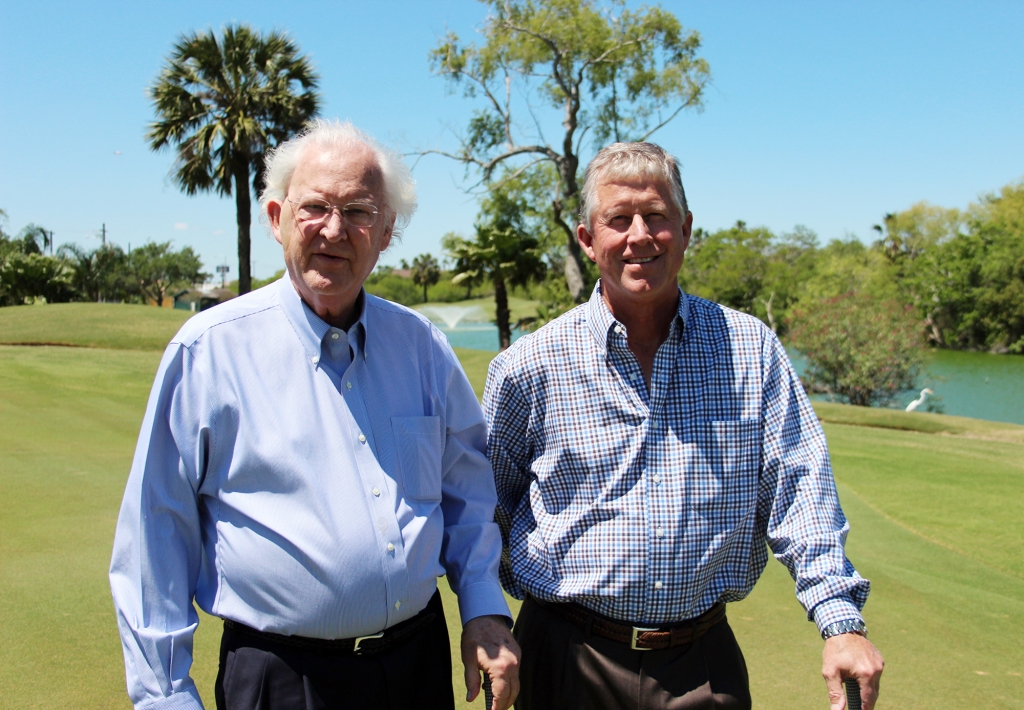 Rick Rogers (left) and Ham Rogers at one of their favorite places — Corpus Christi Country Club.

Making a difference runs in the family, something that has helped make the Richard King III CHRISTUS Spohn Grand Classic the notable fundraiser it has become.

“Dick King asked me to be the chairman one year and name it honor of my dad, so I couldn’t turn that down. And then they asked me to do it again and then again, and so it kind of stuck with me,” says Rick. “My kids were born at CHRISTUS Spohn and so I wanted to give back to Spohn for what they gave to our family, including for what they gave my dad, which was a really fine place to work.”

The Grand Classic began in 1991 when the late Vernon Medlin, M.D., a longtime radiologist and radiation oncologist with CHRISTUS Spohn, teamed with Doug DeSive, Head Golf Professional at the Country Club, to raise money for the hospital system through his favorite pastime.

The 2002 Grand Classic was held in memory of the Dr. Rogers, who had made such an impression on one of his patients, King, that he was inspired to chair the event and host it in tribute of Rogers. As a member of the CHRISTUS Spohn Foundation’s Board of Directors, King championed the tournament for several years. When King passed away, it seemed natural to name the tournament in his honor.

“Helping to sponsor the Grand Classic is something that we can do as a family and serves as a thank you to CHRISTUS Spohn for its quality care and service to the entire community. We’re just playing a little part in the larger game of helping other folks,” says Ham. “CHRISTUS Spohn and its hospitals have been important to our family. We sponsor the golf balls they give out each year at the tournament and it’s just one small way of honoring our dad and showing our gratitude for what we receive from the hospital system.”

The Grand Classic is more than just a fundraising golf tournament, says Rick, pointing out that the event serves as a reminder of what truly is important.

“We’re helping provide more than just brick and mortar, more than just buildings for people to go to receive care,” says Rick. “People like doctors and nurses are the most important component in ensuring that our support makes a difference, and it’s good knowing that multiple programs have benefited over the years because of the Grand Classic.”

The charitable golf tournament has supported the healing mission of CHRISTUS Spohn for more than two decades. The event began in 1991 when the late Vernon Medlin, M.D., a longtime radiologist and radiation oncologist with CHRISTUS Spohn, teamed with Doug DeSive, Head Golf Professional at the Country Club, to raise money for the hospital system through his favorite pastime.