South Texas poses a variety of known hazards for those working the brush country range on horseback.

However, sometimes even the smallest of critters can have the most detrimental of impacts – something the Bull family, of Riviera, knows all too well.

It had been business as usual on Los Jaboncillos Ranch near Premont for Dillard Bull, 19, along with his father, Burt. Calves needed to be weaned and other livestock had to be cut out and moved. Dillard, who Burt proudly touts as his best hand, had been taking part in the customary roundup and the muggy summer morning had progressed as planned. 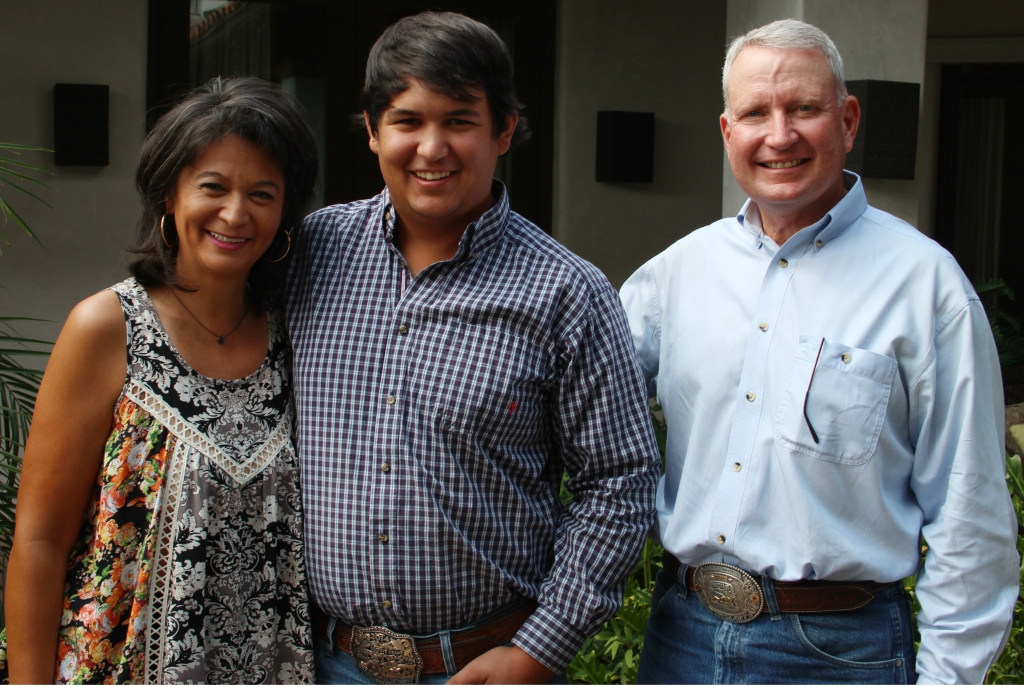 From his perch atop his trusty mount, Dillard wasn’t able to spy the jackrabbit before it brushed up against the horse’s leg, sending the horse into a frenzy.

“The horse didn’t just buck. It spooked and then it would run a ways and then buck at the same time. Finally, I got bucked off and fell, and hit the ground hard,” Dillard said. “I didn’t really think it was that bad at first, but then I tried to get up and felt the pain along my back. I ended up just lying there for a while.”

Burt noted that from where he was at the time, he also didn’t recognize the severity of the accident.

“This was the first time anything like this ever happened to our kids,” Burt said. “From my vantage point, he was waving me over, so I didn’t think at first that it was as serious as it was. But then I saw how he was reacting and I knew something wasn’t right. The area where he fell had a waist-high mat of grass but the ground underneath was pretty unforgiving.”

“Everything was a slow process … even something as simple as just trying to take his spurs off,” Burt said. “But we knew we had to get him to a hospital.”

Burt said the first thought in getting emergency care quickly was to load Dillard into a vehicle, but that after they did, the bumpy landscape only intensified his pain. At that point, they simply were focused on getting Dillard to the care he needed rather than waiting for a HALO-Flight air ambulance transport, Burt said.

The family contacted CHRISTUS Spohn Hospital Memorial in Corpus Christi because it’s the only Level II Trauma Center in South Texas, but because of the proximity of CHRISTUS Spohn Hospital Kleberg in Kingsville, Dillard was taken to its emergency department. Dillard, who played football for Kaufer High School in Riviera, had never been presented with that level of pain, but after finally making it to the hospital, emergency staff were able to diagnose what had occurred and stabilize the injuries. 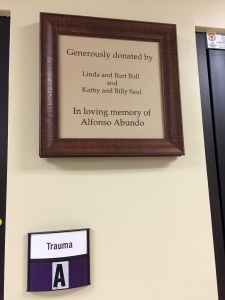 “I fractured the L1 through L4 vertebrae,” Dillard said.

By chance, Dillard was taken to Trauma Room A, which was donated three years earlier by Linda and Burt Bull and Kathy and Billy Saul, in honor of Alfonso Abundo, Dillard’s grandfather. Abundo, who passed away at age 85 in July 2010, served more than two decades in the U.S. Navy, including his stint in Kingsville. His daughters, Linda and Kathy, and their families are part of the Legacy Guest Program as donors to CHRISTUS Spohn. The program is available at each of the hospital system’s campuses and members receive an identification card to present in the event of being hospitalized at any CHRISTUS Spohn hospital.

“We didn’t even think about it (Legacy Guest Program) at the time, but then we got our card and got in touch with the hospital and they passed along the information (to program director Veronica Wenzel). You don’t think about it at the time when you donate, and that’s not the reason we gave, but it did help out our family,” Burt said.

Linda said it was a twist of fate that her son received care in the room bearing his grandfather’s name.

“The doctors and nurses provided us with excellent care and it wasn’t until afterward that they realized who we were and saw that our names were on the plaque outside the trauma room. We didn’t even realize the significance (of the plaque) at the time,” Linda said. “The doctors were thanking Burt and me, but at the same time, we were thanking them for the excellent care we received.”

The Bull family, which remains active in the Kleberg Kenedy County Junior Livestock Show and other notable South Texas events, said it takes comfort in knowing that the community is taking care of itself through philanthropy.

Burt noted that events such as the South Texas Charity Weekend, a quail-hunting fundraiser, reception and dinner benefiting CHRISTUS Spohn Hospital Kleberg, the Caesar Kleberg Wildlife Research Institute, the King Ranch Institute for Ranch Management and HALO-Flight, have only helped to bring good exposure to the Kingsville area. The annual event, organized in 1996 by Frank Horlock, Tio Kleberg and Gus Canales, has helped raise millions of dollars that have stayed right here in South Texas.

“You get people from all over the country who come down here (for the event) and they bring their financial support, too. Some people like to come out and hang around the celebrities, but most people like us got involved a while back and it just grew from there,” Burt said. “It really has become a great thing for our community.”

The new emergency room in Kingsville was dedicated in 2013 to the late Marc Canales, son of Gus and Pat Canales, who passed away in an auto accident in 1996. South Texas Charity Quail Hunts was founded that year to honor the memory of Canales and the organization remains a steadfast supporter of the CHRISTUS Spohn Hospital System.

Bill Colston Jr., a member of the CHRISTUS Spohn Foundation board and president and general manager of Riviera Telephone Company, approached the Bull and Saul families to help with donations to complete the emergency department in Kingsville and they provided the closing gifts needed to fund the expansion. That upgrade included nearly doubling the footprint of the existing emergency area. 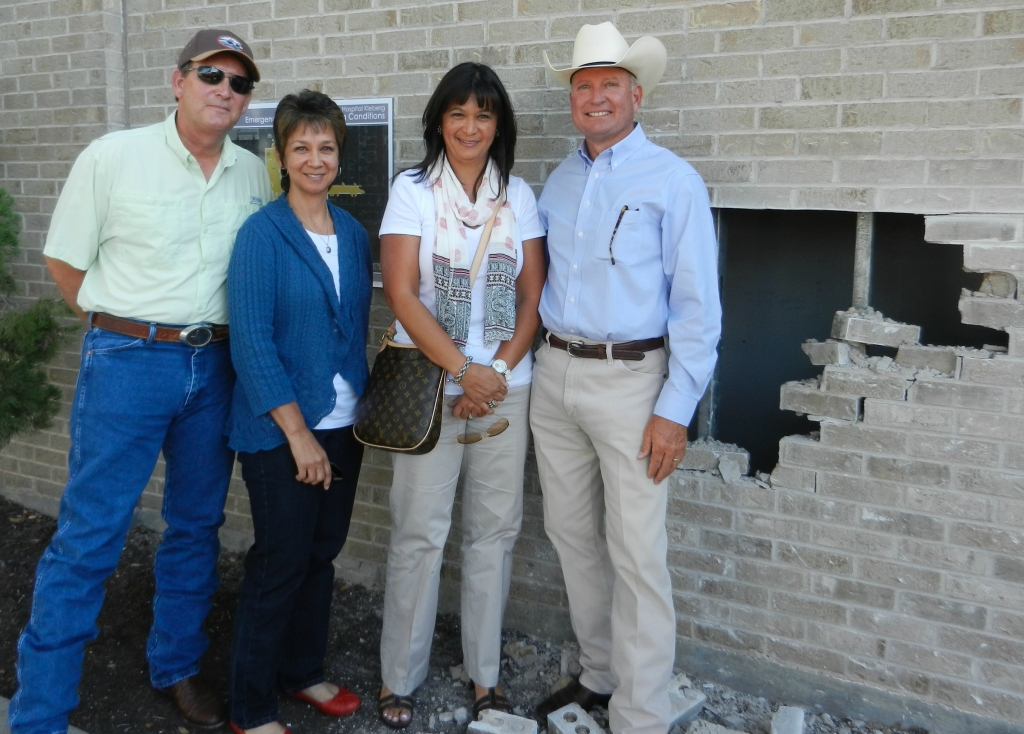 Billy and Kathy Saul (from left) and Linda and Burt Bull

Overall, CHRISTUS Spohn Hospital Kleberg has been the beneficiary of generous philanthropic support from across South Texas that has aided in funding multiple upgrades in recent years, including the larger emergency department, the renovated labor and delivery and intensive care units, and the Colston Family Physical Rehabilitation and Wellness Center.

“We’re getting the care that Kingsville needed and it’s a shot in the arm for us. It’s a big boost for the community,” Billy Saul said. “Everyone there is just great. They’ve got a good staff of physicians and ER nurses, and they care about what they do.”

“Donors help in a big way to make our jobs better, and without their support, we wouldn’t have the ED (emergency department) and ICU that we do (in Kingsville),” she said. “The old ER was small and not as inviting. The rooms were small and the nurses’ station so small, so things got cluttered.”

Rios-Garza noted that upgrades to CHRISTUS Spohn Hospital Kleberg not only have improved the quality of care in the Kingsville area, but also have improved the day-to-day operations for nurses, physicians, associates and volunteers.

“With the help of donors, we get up-to-date equipment and it helps our workflow, especially in the ED,” she said. “They (donors) help in more ways than they may realize, and we’re grateful for all that they do.”

That improved quality of care is something for which Linda herself is grateful, and Dillard, who attended Blinn College in College Station before returning home, remains on the mend thanks to the team at CHRISTUS Spohn Hospital Kleberg.

About the Legacy Guest Program

You can become Legacy Guests based on your annual giving or cumulative giving to the Foundation.

As an eligible Legacy Guest, you will receive personal visits from a Foundation representative and be provided amenities including Legacy Guest linen and china service. Most importantly, as a Legacy Guest patient you and your family receive personalized assistance including help with navigating the hospital facilities. For your convenience, we offer a 24/7 number to call for assistance during your hospitalization.

“It’s a privilege to have the opportunity to serve all of the benefactors who have shown their support for CHRISTUS Spohn and given generously toward our mission of care,” Wenzel said. “I enjoy my role with the Foundation that allows me to get to know them and their families, and I’m available whenever they need me.”