Trauma Center and EMS Save Lives 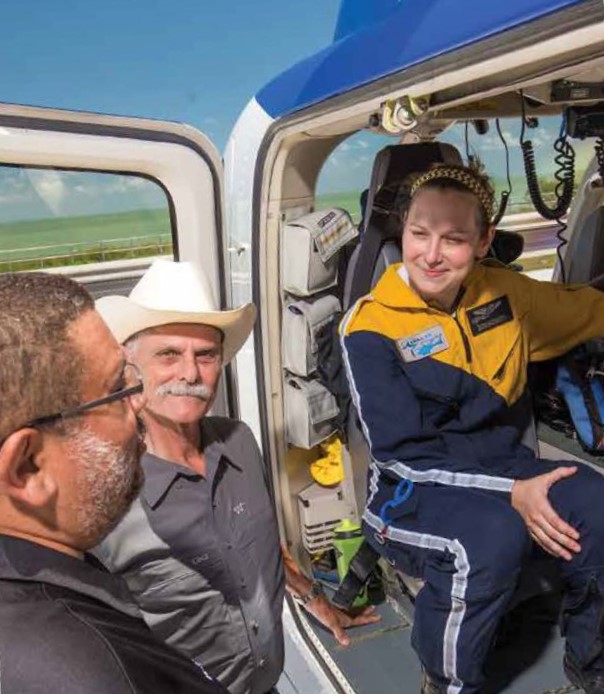 “If we don’t, who will?” That is a question which has inspired Bill Colston, Jr. throughout his life, but which rang especially true during his 32 year career as an emergency medical service (EMS) volunteer responder.

The Spohn-Memorial trauma center became a frequent destination for Colston during his days as an emergency medical responder. After joining the Riviera Fire Department in 1969, he received American Red Cross first aid training and later became an emergency medical technician. However, first aid providers and EMTs can only deliver so much care to patients, and there was a major problem – the high number of vehicle accidents that resulted in critical injuries along Highway 77, which runs through his community.

“The need for advanced life support was very, very noticeable,” Colston said. “We live in a small rural community. Law enforcement and EMS out in the rural area are considerably less prevalent, so it was incumbent upon volunteers to pick up the slack.”

To fulfill the need, Colston advanced his training and became a paramedic. He and his brother, Leslie Colston, also a paramedic, hosted a fundraiser to pay for the ambulance’s medical supplies and equipment. During that time, they were the only two paramedics servicing 1,500 square miles of South Texas between Corpus Christi and Brownsville. Many of their calls involved people who were seriously injured in vehicle collisions along Highway 77. Colston transported many of them to the CHRISTUS Spohn trauma center at Spohn-Memorial in Corpus Christi.

Before there were any air ambulance services, getting a patient to a hospital or trauma center from a rural area during what Colston calls the “golden hour” was an enormous challenge. As a general rule, EMS responders have 60 minutes from the time they arrive on scene to the time they deliver a patient to a facility. Transporting a patient within that time greatly reduces further health risks and improves a patient’s chances of recovery. This was not always possible. In one instance, a worker suffered multiple broken bones after he fell to the bottom of an oil rig platform located on a ranch in Kenedy County. Once Colston and his team immobilized the patient and loaded him into their ambulance, it took 92 minutes just to reach Highway 77. The trauma center was still 45 minutes away. They also had to drive slower than they normally drove to minimize the agonizing jolts the patient felt from bumps in the road. The worker managed to survive his injuries but spent two and a half hours in excruciating pain just getting to the hospital.

“That was the kind of stuff we had to deal with,” Colston said. “If you didn’t have a helicopter to get them to the trauma center as quickly as possible, (the patient’s) chances of survival or their deterioration or their deficits were going to be more severe.”

Then, in 1987, the arrival of HALO-Flight air ambulance service changed emergency medical response in the Coastal Bend in a very positive way.

Transporting patients to the trauma center within the golden hour became the norm, not the exception.

“They are a very critical portion of that definitive care that patients have to have in that golden hour,” Colston said.

Colston’s faith very closely aligns with CHRISTUS Spohn’s mission to extend the healing ministry of Jesus Christ. Without all of the necessary pieces of the puzzle in place, the results for many patients could be fatal, Colston said.

“We’re too mortal to understand why things happen. We don’t understand because it’s God’s plan, and God does have a plan. We are a part of His plan, a piece of that puzzle. So it is up to us to do whatever we can to help Him execute His plan. The patient arrives at the trauma center because all the pieces of the puzzle fell into place that day: the EMS got the helicopter to take the trauma patient to the trauma center, and Dr. Blow and his team were at the trauma center and saved that person’s life. All we did was help God’s plan come together in the way that it was supposed to. And whatever we can do to kind of help that plan come around, we will do. Because if we don’t, who will? So, we just hope we do the right things at the right times for the right people and it makes a difference because that’s what we’re here for.”

Now the retired paramedic and business owner believes the time is right to support the new trauma center being built at CHRISTUS Spohn-Shoreline Hospital in Corpus Christi. Colston worked as president and general manager of Riviera Telephone Company, which has been family-owned since 1937. Although retired from EMS since 2001 and retired from the family business since March, Colston still feels a duty to the people he served for 32 years. He and Riviera Telephone Company decided to make a donation of $1 Million Dollars for a trauma bay in the new trauma center.

“There is no greater impact on the sense of purpose that one feels as a trauma surgeon, let alone as the trauma medical director, than to have the unwavering community support that I have experienced since being here in Corpus Christi. Riviera Telephone Company’s gift is an example of the community’s passionate commitment,” stated Dr. Osbert Blow, Chief Medical Officer for CHRISTUS Spohn about Riviera Telephone Company’s donation to the new trauma center. “The new trauma center is, in my mind, more than brick and mortar. It is a symbol of the commitment that the community and CHRISTUS Health have to our trauma mission. It makes sense: our mission is to take care of the most vulnerable population and there is no one more vulnerable than a patient at the time they are being treated by the trauma team.”

The Level II Trauma Center will include four new state-of-the-art trauma bays and equipment, and a dedicated trauma elevator and operating room which physicians and nurses need to perform critical, life-saving procedures.

If you’d like to donate to the Level II Trauma Center at Shoreline, click the button below!

Donate to our path forward

Click here to view in our If These Walls Could Talk Newsletter.

About the Author: Irashema Medrano